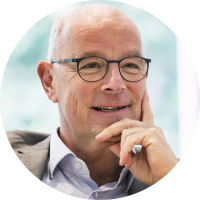 Jan Meerman and retail are inextricably linked. He once started as a deputy director at the purchasing organization and later became the director and later chairman of Mitex (trade association fashion, shoes and sports retail). In 2009, the Central Branch Association Wonen was added and the club was named INretail to match the goal of becoming the largest trade association in the non-food sector.